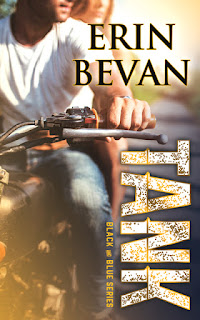 Tank by Erin Bevan is nominated for the RONE AWARD for Best Suspense/Thriller.

Tyler Wilde moves to Black Widow, Texas, to join the Blue Guardians, a local biker club that helps abused women and children. He's intent on starting his life over, but a small piece of his past collides with his present when he runs into the local waitress, Annie Carter.

Annie’s the girl of his boyhood dreams, and Tyler can’t wait to get reacquainted with her. Only problem is, Annie’s engaged. But what has Tyler more troubled than the diamond on her finger is the

Tyler is determined to offer Annie a safe haven, but she refuses his help until her life is hanging by a thread.

bruise that graces her arm. To make matters worse, Annie’s abuser and intended husband is also the town’s Chief of Police.

Purchase a copy at: Amazon

Six years ago and nothing more than a desperate housewife, Erin Bevan began her writing journey.

As a child, reading and writing were her nemeses. It wasn’t until she found herself what felt like utterly alone, and in a different country, that she took up the exercise of reading for enjoyment. Her passion for writing was born not by reading the old classics, but by reading many new tried and true authors of today: Nora Roberts, Mary Kay Andrews, Nicholas Sparks, and Tracy Brogan to name a few.

Clinging to books for friends in a land where not many spoke the English language, she found a secret passion she didn’t know existed inside of her. With nothing more than time on her hands, she honed in on the craft of writing until she finally worked up enough courage to let other people read her stories.

She spends most of her time juggling her three little people and trying to keep everyone’s lives flowing as smoothly as possible. When she isn’t using her super powers to wipe sticky goo from her children’s faces, she spends a little time dabbling in her writing career.