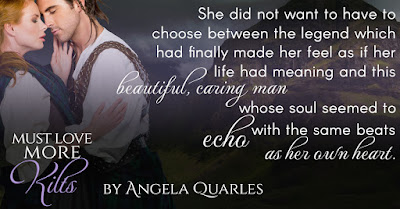 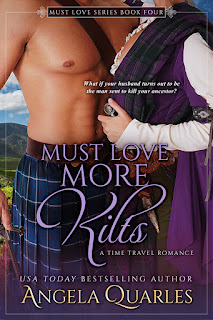 What if your husband turns out to be the man sent to kill your ancestor?
A choice to make…
Highland Games fanatic Fiona Campbell believes her only value is her family's history, myths, and legends. So when she travels back to 1689 Scotland and discovers she's the Fiona of family legend, you'd think she’d be excited. And she is. Except that the legendary warrior she’s to save her ancestor from is the hottie in a kilt she just handfasted.

A heart to heal…
Duncan MacCowan once trusted his heart to the wrong woman, but when a strange lass drops into his life and pries opens his heart again, he impulsively handfasts her. Yet before he can finish spinning fancies of their domestic bliss, she flees on the night of their wedding, leaving him even more convinced that he can’t trust his instincts where his heart is involved.

A family legend that will tear them apart
Fiona wants to shake her fist at Fate—she finally meets the man of her dreams but can’t have him because of the family legend? Not cool, Fate, not cool. Duncan believes he’s just terrible at picking women and destined to be alone. But as the heat of their attraction flares, how far can they tempt Fate for love?  Buy a copy at Amazon 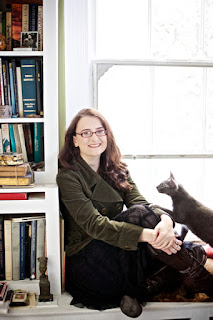 Angela Quarles is a RWA RITA® Award-winning and USA Today bestselling author of time travel and steampunk romance. Library Journal named her steampunk, Steam Me Up, Rawley, Best Self-Published Romance of 2015. Her time travel romance Must Love Chainmail won the Romance Writer's of America RITA in 2016. She has published three books and one novelette, and her latest novel, Must Love Kilts, released July 2016.

Readers have enjoyed the geeky slants to her tales. Whether it's fan girling over Ada Lovelace by having her as a secondary character in Must Love Breeches, or outright geek references with geek types in her romantic comedy with paranormal elements, Beer and Groping in Las Vegas, or going all Southern steampunk in Steam Me Up, Rawley, Angela likes to have fun with her romances and hopes her readers do too. In addition, she loves history, folklore, and family history and combines it with her active imagination to write stories of romance and adventure.

Angela works at an independent bookstore and lives in an historic house in the beautiful and quirky town of Mobile, Alabama. When she's not writing, she enjoys the usual stuff like gardening, reading, hanging out, eating, drinking, chasing squirrels out of the walls and creating the occasional knitted scarf. She's had a varied career, including website programming and directing a small local history museum, and has discovered that writing allows her to explore all her interests. You can find out more by visiting www.angelaquarles.com.

They were under attack!
Now Fiona’s stomach roiled for more reasons than just the motion of the ship as she and Duncan scrambled across the deck of the galley, Duncan pulling her along.
Near the mast, he lifted a plank on the deck and shoved her into the dark recesses between the rowing benches. “Stay here,” he barked.
Numb to do anything other than obey, she squatted. Muffled musket fire sounded outside, as well as the occasional boom of a cannon, rocking the ship.
He jumped into the space with her and crouched, rooting around. He pulled a sword out. “Here, take this.” He tossed it to her, and she caught it in trembling hands. “But remain here, aye? Don’t be coming out until I tell ye.”
Another explosion rocked the ship, the sound louder than any of the previous ones. The ship lurched to the side, and she fell back against the wooden bench.
Caught off guard, Duncan rolled toward her. He grabbed a bench seat, but his forward momentum swung him toward her, his face serious, his gaze holding hers.
Holy shit. Holy shit. Holy shit.
They were under attack!
It seemed like that was all her mind could do, repeat that phrase—and holy shit—over and over, while her heart beat louder than the exploding cannon and icy fear gripped her stomach.
She clamped down on the bench with one hand, resting against it, the sword gripped hotly in her other hand as chaos raged up above.
He must have thought she looked ready to raid the enemy ship instead of raiding the future for the biggest bottle of Tums, because he continued, “I mean it, Fiona. We’ll outrun them. We must, for they have cannon, and we do not. To be safe, though, pray for the wind to die.”
Somehow she found her voice. “Die? Don’t we need…?” She breathed fast and hiccupped. “Don’t we need the wind for the sails?”
“They do, aye.” He pointed to the benches on either side of them. “But we can row. They can’t. Never fear. If we cannot outrun them, we’re equipped to handle the swine if they dare board us. I’m betting they won’t be having the nerve.”
She nodded. “But I reserve the right to leave if the ship starts to sink.” A watery grave was not for her if she could help it.
He crouched closer to her, her knees touching his shins. He grabbed her face, his eyes searching hers for a beat. On a groan, he swooped down and pressed a quick but fierce kiss on her lips. “We’ll not be sinking.” His eyes and voice were full of conviction. With that, he leaped out, replaced the plank, and left her in complete darkness, only broken when the orange light of distant cannon fire bled through the cracks.
She touched her lips with trembling fingers, his warmth and taste still lingering there, she’d swear. And she concentrated on that sensation instead of the fear touching, clawing, her everywhere else.
Posted by Karen Michelle Nutt at 7:08 PM 1 comment: