Today, she's here to tell us about her upcoming release, SPOOKY SOJOURN and it will be available just in time for Halloween! Enjoy a sneak peek of the except below, learn if Ashley has ever seen a ghost, and enter the contest!


Looks like the CONTEST Ended readers!
One lucky blog tour visitor for Spooky Sojourn will win a $20 Amazon gift certificate. READ on to find out how you may be a winner! The contest will run until midnight October 31st. Good luck!!

KAREN: If you were a book, what would your blurb be?

Hard of hearing, disabled vet Ashley Ladd has never forgotten or stopped loving a young airman she met in Biloxi, Mississippi on her first military assignment. Although she’s tried hard to forget him, he won’t stop visiting her dreams. Finally, she attends an Air Force reunion hoping to see him again.

KAREN: Tell us about your story. What’s it about?

ASHLEY: An Air Force veteran who finally gets reunited with the love of her life.

KAREN:  What’s next? Any works in progress?

KAREN:  What do you do for Halloween? What was your favorite costume?

Oh! I remember! One year I was Mrs. Thurston Howell and my husband was Thurston Howell III and our second oldest son was Gilligan. We won the costume prize at church. One year I want to be Endora, Samantha’s mother. I’ll wear a big (fake) bug on my shoulder and his name will be Darren.

I think I want to have a séance this year – or go ghost hunting.

KAREN:  Do you believe in ghosts? Have you ever seen one?

ASHLEY: Honestly? I don’t know. I don’t think so, but I’m not 100% sure. There are a lot of unanswered questions in our universe. A couple of my friends swear they’ve seen ghosts and they are not flighty people. My October release features a few ghosts.

I went ghost hunting in French Lick, Indiana at the French Lick Springs Resort when I attended a romance writer’s convention about twelve years ago. The original owner of the hotel was said to haunt the hotel and even ride a ghost horse down the 13th floor hall. And there was a haunted elevator. I didn’t see his ghost but we had a lot of fun looking for him.

KAREN:  Is there anything else you’d like to tell the readers?

ASHLEY: I hope ghosts are real. They’re a lot of fun to hunt, write, and read about.  I hope you’ll enjoy my new book Spooky Sojourn which features a couple of feisty ghosts.

KAREN: Thank you Ashley for being my guest today and answering the questions. I'd like to believe ghosts are real, too. :) I love Ghost Hunting and taking tours. My goal is to one day catch a spirit on film. :)

Now for more from the lovely Ashley Ladd...

October is a Fun Month By Ashley Ladd

October is a fun month, probably the month of the year when I have the most fun. It’s certainly the only month when we weave spider webs and welcome bugs into our homes, when we make and even eat creepy disembodied bloody fingers.

When else can we put glowing “green eyes” in our bushes to scare little children and not get arrested?
When can we chase ghosts and hold séances and not get wrapped up in a straight jacket or thrown into a mental hospital?

It’s certainly a topsy turvy, crazy month. But a month filled with wild possibilities, frivolity, laughter, dreams, and fun. More fun than most of us have in the six or seven months before combined.

What do you do to celebrate October?

I’ve hunted ghosts. Hung out in grave yards—to be honest, I’m into genealogy and was hunting ancestors. Conducted séances. Participated and even won costume contests. Trick or treated. And of course I ate a TON of candy and baked goods and decorated every inch of my house with jack-o-lanterns, spiders, bloody bones, and other ghostly things.

Being a German descendant from Cincinnati, I also celebrate Oktoberfest every year. That’s almost as much fun as Halloween. There’s loads of dancing, music, and of course, beer and decadent food. Although I don’t dress up in lederhosen, I jump right in and party hard. 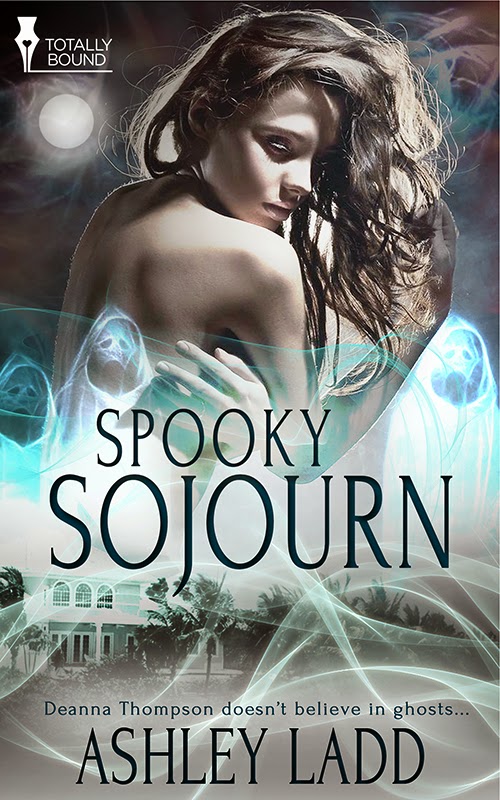 BLURB:
Someone’s trying to kill Deanna, but is it the ghosts she doesn’t believe in, the rich socialite who might be a murderess, or someone else with a beef against The Gilroy Hotel and Resort that Deanna has just been hired to manage?  The Gilroy’s owners want the ghosts, or whoever is causing the trouble at the hotel eliminated, and they are pressuring Deanna to do the job as quickly as possible. Harry DeVeaux, paranormal investigator comes highly recommended to do the job and against Deanna’s better judgment, she hires him.

Although Deanna thinks Harry’s crazy for believing in ghosts and Harry thinks Deanna has a closed mind to the possibilities of ghosts and they highly annoy each other, sparks fly. Deanna can’t help but fantasize about Harry and inspired by a romance convention visiting her hotel, writes her fantasies in a private blog that Harry finds, hacks, and reads. Ooh la la!

Excerpt:
Breathlessly, Tabitha said, “There’s freaky activity in the bowling alley again. Pins started falling in front of the guests. Worse, they flew out and started flying straight at them, like they were going to attack them.”

Damn. Like they’d done with me. “Is anybody hurt? The pins didn’t strike anyone, did they?”

“I don’t think so but the guests are hysterical. They ran out of the bowling alley screaming bloody murder. Other guests rushed in to see what the commotion was about and witnessed it too. Our workers George and Joel refuse to go anywhere near the lanes. They’re threatening to quit. Several guests are checking out and demanding their money back for their stay. Should I comp them a night’s stay, or what?”

Hating to comp rooms, she didn’t see any way around it. If inanimate objects started chasing her, threatening to bash in her skull, scaring the living daylights out of her, she’d demand her money back too. “Comp them a night’s stay and apologize profusely.”

“Yes, boss. Will do.” Tabitha sounded less than sure despite her words.

“Tell the lane attendants I’ll be right there and for them not to leave.” Groaning, Deanna tugged the bow on her kitty cat pajama bottoms loose, preparing to kick them off. She signed off, undressed, jumped into her uniform and tied her hair up in a high pony tail. Almost ready to go, she slipped on her shoes before calling Harry.

“I need you.” She’d meant to say, ‘I need your help’, but the Freudian slip had gotten the better of her. “Can you join me at the bowling alley right away? Pins are flying around, following people again. At least they were until they scared everybody out.”

“I’m on my way.” Glee and excitement tinged Harry’s voice.

Those weren’t exactly the emotions overcoming her at the moment. Apprehension, worry and even some anger that somebody would dare endanger her guests and her staff, strafed her. “Did you set up your surveillance cams like you were planning?”

“Of course. We should have some good footage to view. I almost forgot to tell you that we captured some video of knives flying about the kitchen last night too.”

Annoyed, pushing her hair errant behind her ear, she asked, “When were you planning to tell me?”

PURCHASE YOUR COPY OF SPOOKY SOJOURN AT:
TOTALLY BOUND

Ashley Ladd lives in South Florida with her husband, five children, and beloved pets. She loves the water, animals (especially cats), and playing on the computer.

She's been told she has a wicked sense of humor and often incorporates humor and adventure into her books. She also adores very spicy romance, which she weaves into her stories.


DON'T FORGET ABOUT THE CONTEST!
One lucky blog tour visitor for Spooky Sojourn will win a $20 Amazon gift certificate. Be sure to enter your email address so Ashley can contact you if you’re the winner. The contest will run until midnight October 31st.

a Rafflecopter giveaway
Posted by Karen Michelle Nutt at 12:00 AM 2 comments: