And the Winner of the e-copy of Phantom Touch is... Ashley. Congrats!

Karen: Delilah Storm lives where there is beautiful scenery and incredible people that help spark ideas for her fantastic tales. In her flash fiction story, Scarecrow Scare, Gus finds out his scarecrows not only have a brain, they want to make their thoughts known.

***Giveaway: Delilah is giving away an Ebook copy of Phantom Touch (m/m erotica) to one lucky trick or treater. Read on and find out how you may add this to your goody bag!

Don't forget to enter the Rafflecopter daily for extra chances to win one of the Grand Prizes!


Gus looked out over his freshly harvested cornfields.  It looked eerie now, with the only things standing upright being the scarecrows.

A traditionalist, his scarecrows were made of old clothes jammed with straw and either painted stuffed burlap sacks or half rotted pumpkins for heads, and mounted on stakes.  They were supposed to help protect his crops from the ravenous birds that infested the farm, but he’d installed an ultra-sonic bird repeller. Now the scarecrows were little more than decorations.

His kids had fun with them, and that was the important thing. So he left the scarecrows alone, for now.  Maybe next year he’d get rid of them altogether.  It was a pain in the ass to drive his tractors around them.

A loud creaking noise had Gus looking out over his fields once again.  In the growing dark nothing was clear.  He cocked his head to one side, listening, but no other sounds emerged.  Gus shrugged, dismissing his unease.  It was always unnerving to look out over empty fields.  After so much time and effort went into growing the corn, seeing nothing but empty fields felt… unnatural.

With a last nervous look over his shoulder, Gus went inside and warmed up his dinner.  The family wouldn’t be back until tomorrow.  Tonight they were trick or treating with their cousins and staying overnight at Gus’s sister’s house.  They loved Halloween in the city.  They got a lot more candy out there than they would in the farms, and Gus was only too happy to share.

Gus sat in the recliner to eat his dinner in front of the TV.  On hot nights, like tonight, he left both the front and back doors open to enjoy the cross breeze over his tired body.  The living room was the only place in the house where you could see both front and back doors.  Before he knew it, Gus was sound asleep.

The porch creaking loudly in the uncommonly silent night woke Gus.  He lurched out of his recliner, spilling his beer and cursing loudly as he stumbled to the window.  He blinked several times, trying to focus as he wiped the spilled beer off his shirt.  At least there hadn’t been much left in the bottle.

Movement from the corner of his eye caught Gus’s attention.  He looked, then looked again.

Standing there, not two feet from the front door, was one of the scarecrows.  Gus rubbed his eyes, trying to deny what was clearly standing right in front of him.

Gus wrenched from his frozen state as the scarecrow moved, reaching for the screen door.  Gus ran slamming the inner door closed.  He leaned his head against the wood, gasping for breath.  He’d never moved so fast before in his life.

Dread choked Gus’s throat as he heard the back door open.  He was too terrified to look, but even more terrified not to.  He turned, looking out of the corner of his eye.  He watched in horror as the scarecrows’ erratic movements brought the straw-stuffed creature into his house.

“Holy God!” Gus prayed.  He scrambled to his feet, grabbing the fireplace poker to defend himself.

More scarecrows staggered into the house. Fear raced through every pore on Gus’s body.  Gripping the weapon firmly in both hands, Gus let out a defiant shriek as he swung at the closest creature.  The pumpkin head exploded, scattering pumpkin over the room, but the body lurched closer.

Gus swung the poker repeatedly, hitting one form after another, but it didn’t stop the terrifying onslaught.  Pumpkin guts, straw and leaves were scattered from floor to ceiling, yet the scarecrows continued to shamble ever nearer.

Gus was backed into the living room until he tripped over his recliner and sat with a loud thump.

“Stop!” he shrieked, swinging the poker to no avail.  The scarecrows gathered around him, pressing him into the chair with straw limbs until Gus couldn’t move.  The scarecrows leaned over him, oozing pumpkin guts and rotted straw as though dripping blood and entrails all over Gus.

With surprising strength, Gus’s head was wrenched back until his mouth gaped open.  One scarecrow reached forward, shoving something into his mouth.  Gus tried to fight, but he was pinned.  He spit and coughed, trying to dislodge it.  Feathers?  He glanced down.  Yes, it was feathers.  The scarecrows were stuffing black feathers down his throat.

Gus coughed, choking repeatedly.  But again his head was wrenched back.

One scarecrow, seeping rotted pumpkin flesh all over Gus’s face, held something up in front of his eyes.  Gus could see wires and circuits. It took several moments before he realized what it was; a transmitter.

“What?”  Gus muttered around the feathers still clogging his mouth.  His eyes darted from one scarecrow to another.  It took a moment, but he finally understood.  The scarecrows were angry with him for installing the sonic repeller.  It was their job to guard the fields and Gus had taken it away from them.

Gus gurgled as the mechanism ground against his face.  He could feel the plastic and wires cutting into his skin and he knew they meant to shove it down his throat.  He was going to die by the hands of his own scarecrows.

“Jeeze.”  Gus rubbed his eyes, trying to get the vestiges of those terrifying images out of his head.  He struggled out of the recliner that had somehow trapped him.  With trembling hands he turned off the Halloween horror show playing on the TV and stood in the middle of the brightly lit living room.  He took deep breaths trying to calm his frantically beating heart.

Gus stared out of the back door, trying to work up the courage to look outside.  He knew he wouldn’t see anything, but the fear he’d felt in the dream invaded every part of his body.

“Stop being stupid.” Gus directed himself.  Another deep breath and he stomped through the waving screen door and stood on the porch, glaring defiantly at the empty fields.  It took a few minutes for his eyes to adjust to the gloom, but he could just make out the scarecrows swaying in the wind.

Gus jerked sharply as he caught movement out of the corner or his eye.  He stared into the field, squinting into the dark night.  Had that scarecrow always been that close to the house?  He thought it had been further out in the field.

A gathering of feathers and straw blew across the porch. Gus shuddered, and stepped quickly back into the house.  He bolted all the doors and left every light in the house on as he crawled, fully dressed, into bed.  He pulled the covers up over his head and curled up as tight as he could.

First thing in the morning he was moving all the scarecrows to the outer fields.  And maybe he’d get rid of that bird repeller.  Gus had been thinking that thing was useless for a while now. It had nothing to do with his dream.

But it was a long time before Gus could look at those scarecrows again without a shiver of apprehensive fear coursing up and down his spine. 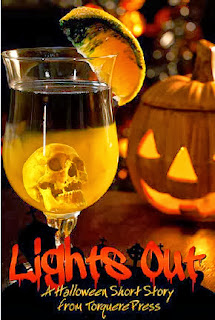 About the book: Phantom Touch... Coerced by his friends, Chris enters Weyburn mansion on Halloween night.  The most haunted housed in Ashville, Weyburn mansion is supposed to be possessed by the spirits of Mrs. Weyburn and her many lovers.  From the moment Chris enters, he’s plagued by touches which quickly turn into caresses and then so much more. How can Chris possibly escape all the pleasure those touches bring.  Does he really want to?
Your can purchase a copy at: Torquere   Amazon
All Romance Ebooks

****GIVEAWAY: This is for an Ebook Copy of Phantom Touch (m/m erotica). All you have to do is leave a comment about your favorite Halloween movie. Don't forget to leave your email so Delilah may contact you if you should win!!

About the Author:
Delilah Storm lives way up north where the beautiful scenery and incredible people help place the backdrops and build ideas for her stories. Delilah does her best writing when it’s cold outside and the laptop sitting on her legs and the frantic keyboarding help to keep her warm. Delilah has been writing since junior high, but according to family and friends, she was telling stories long before that.  If she’s not reading, she’s writing and if she’s not writing she’s baking, and if she’s not doing any of those things, she’s probably not having a good time.  Delilah sees no end to all the things she has planned and no shortage of ideas for stories, so she’s hoping a good anti-aging solution will be invented to help her stay young enough to do it all.

Thanks so much for participating in the bash! Hasn't it been fun! I'm loving all the stories. Yours was creepy and just perfect for Halloween!

One of my favorite Halloween movies is Hocus Pocus. I like cute more than gory! :)

Oh, that was creepy, Delilah - have to say I'm glad it ended that way!

Thanks for giveaway. I hope you have a wonderful Halloween.

That was a creepy story, I got the shivers reading it.
Favorite Halloween movie - Hocus Pocus.
skpetal at hotmail dot com

I still love IT'S THE GREAT PUMPKIN, CHARLIE BROWN (don't know if that counts as a movie). ARSENIC AND OLD LACE is pretty fun, too!

I loved the story. Awesome job. Thanks. My favourite movie is the nightmare before Christmas.

Hi, Delilah. That was a great story. Fun and creepy at the same time. My favourite movie is Beetlejuice.

Great story. Scarecrows always creep me out the way they hang in the cornfields.

My favorite scary Halloween movie is the original Halloween and my favorite funny one is Hocus Pocus.

Hi All. Thanks so much for reading and leaving comments. My first flash fiction was tons of fun. And the winner of the e-copy of Phantom Touch is... Ashley. Congrats!

Looks like my comment didn't show up. My fave Halloween movie is Shawn of the Dead. Can't wait to read Phantom Touch, I love M/M paranormals.