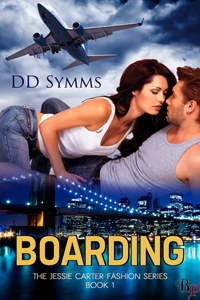 After writing a few short stories, the need to write a novel and delve into the character of Jessie Carter tugged at me. She is the heroine in my short story Layover and I kept asking, "what did she do prior to Layover?"

I originally intended for Boarding to be about 25,000 to 30,000 words but the story kept developing and took me on some fun twists and turns to become novel length.

Contemporary fiction with a strong focus on relationships appeals strongly to me. The fashion industry kept getting me interested the more I poked around, researched fashion designers online, and chatted with a designer in person.

She had worked with Tommy Hilfiger and talked about 12-hour to 14-hour days. I wouldn't have had any idea designers put in days that long.

Jessie Carter gets the surprise of her life with a chance to design a dress in a day for world famous model Veve Rouselette.

Jessie undergoes a change in the story. In the beginning, she's longing for romance with her boyfriend Raymond and becomes frustrated when he doesn't let her know if he's going to join her during her visit in New York City.

She's sexually frustrated with him and his plans for her career.

Later, she seduces Raymond and takes charge of her sexuality as a way of defending her career choice.

Jessie is cared for by the bisexual assistant to the model's manager and she begins falling for him.
Boarding is for 21 years and up and while the heat level is high, I believe readers will find common ground with Jessie and the friends who guide her to a new adventure as though she were boarding the flight of her life. 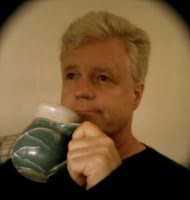 DD Symms worked in radio news and wrote marketing material for nonprofit organizations much of his career before dusting off the fiction he studied in college. Boarding is his first novel and fourth published story – all with Breathless Press.

He lives with his family in Southern California where he spends as much time as possible outside.

Boarding is available for purchase on:
AMAZON
ALL ROMANCE EBOOKS
BOOKSTRAND
BREATHLESS PRESS

DD,
Thanks so much for being a guest here today.

I like your book cover. Was it what you envisioned it to look like when you wrote the story?

Thanks so much for hosting me.

Yes, I'd have to say the cover hits close to home. I wrote a detailed description for the artist, Victoria Miller, in this case and I knew there would be many elements and create a challenge.

The skyline is a nice touch and gives context in a way that's inviting.

It's a huge step from short stories to a novel. I used to write only short stories and, when I decided to write a novel, I knew it was a big commitment and it unnerved me a bit.
I love when an author takes on research with people who really know the facts you're looking for. It's kind of fun, too, to interview someone and find out a new branch of work.
Your book sounds so interesting, especially since your heroine seems to have a propensity to become enamoured with unavailable men. At least that was my take on her.
I wish you the very best on this venture into novel writing, DD.

@Sarah J. McNealThanks so much for stopping by. DD, tale does have me intrigued. :)

I've written 2 novels by now that did not see the light of day. One was gone over carefully by an editor and publisher and they gave great feedback. I really wanted to get the novel written and truly uncover more about the character.

I'm doing more research for Arrival, which is well underway and the story will have more twists and turns.

My background includes journalism and I do alot of non-fiction interviewing of business owners so the research is natural for me.

Plus, I knew nothing about the fashion industry.

Karen, again many thanks for hosting me.

Arrival is even stronger I believe and will be fairly different.

I'll be glad to send you and anyone else the 1st 3 chapters as a sample.