How to Write a Historical Fantasy

KAREN: James Calbraith's epic fantasy, The Shadow of Black Wings, will sweep you away into an adventure you'll not forget. He's here today to give us key points on how to pen a successful historical fantasy. Let's give James a warm welcome.

****Giveaway:  The Shadow of Black Wings:  8 eBook copies and 2 Print copies. Details below.

How to Write a Historical Fantasy by James Calbraith

Historical Fantasy is not an easy genre write, and even harder to write well. Here are a few tips I picked up while writing my historical fantasy series, "The Year of the Dragon".

1. Choose the right period.
This is a tricky bit. Do you write about something everyone knows and likes, or do you want to be original? The first one is an easy, safe choice. US Civil War, Ancient Rome, Egypt... periods like that require no explanation, no setup. All you need to do is show the "fantasy" bits - where our world is different from reality - and you're ready to go with the plot.
But there is a downside: all of this had been already written about. Chances are, the topic was exhausted, and the readers are getting bored. And while that may not be deterrent for some, you may want to carve your name out as an author of an original historical fantasy, set in a period only a select few even know about.
This choice has its disadvantages too; you have to become a teacher, not just a writer. The more obscure moment in time you choose, the more you will have to explain to your readers, and you are in danger of overexposing for the sake of plot and characters.

2. Write what you like.
This is a variation of the old adage "Write what you know". It should go without saying, but don't pick a theme and subject that will not interest YOU, even if you think it's going to be a hoot with the readers.

In other words, don't go with the trends for the sake of it. If you choose to write about Egypt because Egypt is fashionable, but you'd much rather delve into the mysteries of the Ottoman Empire, not only will writing your book become a thankless chore, your readers will quickly pick you up on it.
On the other hand, a passionate writer can make even the dullest setting fascinating, especially in fantasy; there is nothing that adding a dragon or a wizard will not enhance. And if there's anything I've learned over the years of studying history, is that there is always something interesting happening, somewhere.

3. Balance your research.
If you've embarked on writing a historical novel, you probably already like history. You like to read about it, you like to do your research, you like to immerse yourself in all the tiny details and minutiae of the period you write about.

But your readers will be looking for entertainment, doused in historic sauce with a sprinkle of facts, rather than an essay. Balancing between what you know, and what you write, is one of the most difficult things in writing any historical fiction; especially if the period you write about is little
known, or the world you present is very different from ours.

Say too little, and the reader will remain confused, trying to figure out the setting rather than action.

Say too much, and the reader will get bored with the info dumps and move on to something more entertaining.

4. Create a relatable character.
This is true for every novel, of course, but more so in a historical setting. If you want to stay faithful to historical truth, there will be plenty of personalities, professions, personal situations which have no relation whatsoever to modern reader. Others will simply offer very little in terms of interesting story. That's why most characters in historical fantasy are usually brave knights, hedonistic aristocrats or geeky scholars-turned-detectives.

If you insist on making your character a medieval peasant, or a 19th century weaving company accountant, there is a chance to save your book if you set them in a "fish out of water" story, or throw them straight into impossibly complex action. These are universal, relatable situations. Of course, you may still want to just write a book about a simple small town life in dragon-infested Northern Europe. And it may be a great book. But you should be aware that you'll be making things difficult for yourself.

5. Sense the sensibilities.
One issue that's necessary to be tackled with to make the story and characters relatable, is adjusting the sensibilities of the era. Unless your book deals specifically with these sensibilities, it's a good idea to modernize them a little. After all, you probably don't want your main character to be as racist, sexist, violent and generally irritating as many people from the past would seem to us today.

Since what you write is a fantasy, and not a history handbook, you can play with these things to your heart's content. In an alternative world, anything is possible. Slavery may be shunned. Women can have more freedom. After all, fantasy is an escapist genre - and there's nothing wrong about that. We can use historical fantasy to create a make-believe world that's made of "best of both worlds": the fun, romantic bits of the past with the safe, rational bits of the present.

And that’s all there is to it! The rest is just writing a good book. 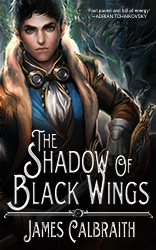 "Fast paced and full of energy"
--Adrian Tchaikovsky, author of the Shadows of the Apt

"This manuscript is full of highly crafted detail that will make readers shiver at times with fear and delight ... a familiar yet highly original fantasy that is a worthwhile read."
-- Publishers Weekly

"The real-world cultures are incredibly well-researched and truthful, and yet well-balanced with the fantasy elements. An intriguing and impressive series."
-- Ben Galley, author of the Emaneska Series

It is the Sixteenth Year of Queen Victoria. In the powerful empire of Dracaland, Bran, a young dragon rider, joins his father on a military expedition to the mysterious lands of the Orient. In the reclusive Yamato, Sato, a tomboy samurai girl, strives to prove her right to inherit her father's school of western magic. Nagomi, a timid shrine apprentice, is haunted by the visions of dark future she must keep secret even from her best friend.

They don't know it yet, but their paths will cross... And when they do, nothing will ever be the same again.

Welcome to The Shadow of Black Wings, a steam-powered romp across the land of dragons, wizards and samurai. It's big, it's fast, it's been compared to Tolkien in terms of world-building, it has strong female characters and lots of carefully researched detail. You will meet the Royal Marines sailing mighty ironclads and Chinese walking machines; mysterious warlords and crazy inventors; you will discover dark prophecies, family secrets and blood-thirsty demons. And all that in just the first volume!

About the Author:
James Calbraith is a 34 year old Poland-born writer, foodie and traveller, currently residing in South London.
Growing up in communist Poland on a diet of powdered milk, Lord of the Rings and soviet science-fiction, he had his first story published at the ripe age of eight. After years of bouncing around university faculties, he moved to London in 2007, found a decent IT job and started writing in English. His debut historical fantasy novel, ""The Shadow of Black Wings"", has reached ABNA semi-finals. It was published in July 2012 and hit the Historical Fantasy and Alternate History bestseller lists on Amazon US and UK.
Website/Blog | Twitter | Facebook | Google+ |

Giveaway: Just enter the rafflecopter and you may be the next winner! Lots of chances to win!
a Rafflecopter giveaway
Posted by Karen Michelle Nutt at 12:00 AM

I enjoy historical fantasy and they are tricky to write and develop your world. Thanks for the insight.

Thank you so much for sharing your new release, and giving us some pointers on writing a Historical Fantasy!

I wish you the best success!

I love history and fantasy both. Combining them would be great fun! You've given me a lot to think about. Thank you for a very interesting and informative post.

Best of luck with your writing. May you become the next Joseph Conrad, whom I admire greatly.

Thank all of you for the kind words - glad you enjoyed the post :)