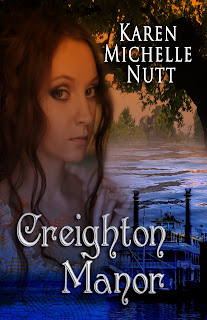 The last thing that Gillian Metcalf remembers before she passes out is being aboard the Queen Mary in Long Beach, California, where she witnessed a dog disappearing as if it were a phantom. Now she’s aboard the riverboat, Ida Belle, traveling down the muddy Mississippi. It is 1870, where men carry guns and throw knives. It is a time where reputations mean everything. Before she can determine how she’s miraculously stepped from one world into another, she is being forced to marry Zachary Creighton. Trouble follows the man and it looks like she’s along for the ride.

As she attempts to understand why she was sent back to 1870, she struggles to come to terms with her own desires that tempt her to surrender to a man she barely knows.

Zachary Creighton, a gambler with one goal: to win back Creighton Manor. Marriage was not part of this plan. To keep peace with his reluctant bride, he makes a bargain with her. He needs someone to tutor his nephew Tyler, and she needs a roof over her head until they can annul their sham of a marriage.

Never did he expect his bride to be embraced into the family fold by his grandmother, Lotti. However, the biggest surprise of all is that he finds himself falling for her charms.

When the reason for Gillian’s appearance into Zachary’s world is finally revealed, their love for each other will be tested. Gillian will have to make a difficult decision before she can find happiness. The stakes are high, but Zachary will risk it all to win Gillian’s heart.